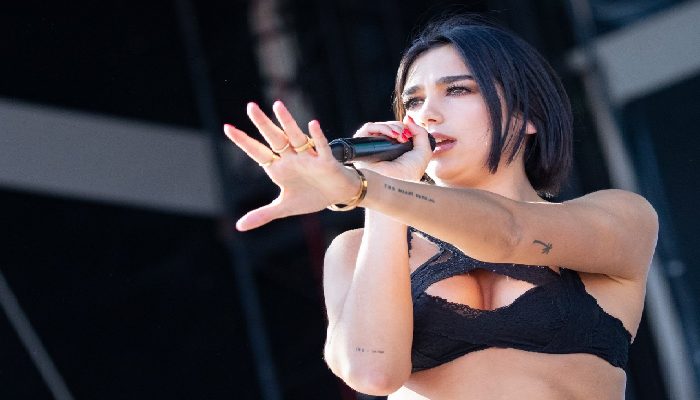 If you have been following music, you should be aware of the popular name Dua Lipa who is a popular English singer. Initially working as a model, she released her first album in 2017 and managed to become a world sensation!

Dua Lipa has been considered to be a shining star in the British music arena and has been able to get into the prestigious list of The Next 100 Most influential People on Time.

Dua Lipa was born in London on August 22, 1995. Later on, her parents moved to Kosovo in then Yugoslavia when she was just 13. Her father is Dukagjin Lipa and works as marketing manager and vocalist for the local Kosovo rock band Oda. Her mother Anesa Lipa works in the tourism sector.

Dua Lipa attended Sylvia Young Theater School part-time. She also attended the Third Millennium School in Pristina. It was here that she developed an interest in 4shared music. She wanted to build a career in music and did not think the smaller confines of Kosovo did not meet her expectations of the career she expected in terms of musical growth. That was precisely why she planned to move to London. Fortunately for her, the parents were not hesitant to send Dua Lipa to London on her own.

Dua Lipa began her music career at the age of 14 by posting covers for YouTube. She began doing cover songs of her favorite stars such as Pink and Nelly Furtado. She claims that she took inspiration from Justin Bieber who rose to fame through YouTube and that is precisely why she thought of taking that route.

She worked in a host of odd jobs to pay for her music lessons – such as hostessing at restaurants and nightclubs. When she was 16, she began working as a model for ASOS Marketplace. She was hopeful of meeting people who can launch her music career. She even made a screen debut with a commercial for The X Factor in 2013. She took up with Tap Management in the same here which offered her a salary to leave her job and focus on recording music.

It was during her tenure with the Tap Management that she wrote a song Hotter than Hell. This led her to sign a deal with Warner Music group in 2015. The year 2015 saw her releasing her first single New Love. The second single from the singer Is The One was a huge hit. It went on to reach the number 1 position in Belgium, Number 6 in Australia, and Number 9 in the UK.

In January 2016, she launched her first tour to England and Europe. The tour went almost a year and concluded in November 2016. Her third single Last Dance came up in February 2016 and the Hotter Than Hell that she wrote during the initial days of her career was released in May 2016. The sixth single Blow Your Mind (Mwah) was released in August 2016. While Hotter than Hell peaked at Number 15 in the UK, the Blow your Mind topped at No. 30.

In January 2017, Dua Lipa won EBBA Public Choice Award. She also released her next album Scared to be Lonely in 2017. The single reached the top 14 in the UK. The turn came in 2017 with the launch of her first self-styled album, which reached  #5 in the UK as well as #3 in Ireland. The single New Rules was also launched in 2017 and went on to become top 1 in the UK. It was her first single to do that. It reached the number 1 position in Belgium, Ireland, and New Zealand. That was the beginning and since then, Dua Lipa has been coming with a host of advanced performances with her singles and albums.

Dua Lipa has won several awards in recognition of her contribution to music. In 2017, she was awarded Teen Choice Award for Choice Breakthrough Artist and she was also awarded as a Young and Promising International Artist at the SCTV Music Awards. In the year 2018, she received nominations in five categories at the Brit Awards. It was the first time that a female artist received as many as five nominations.

The year 2021 saw her featured on the Time 100 list. That is one of the excellent options for a female star. Ever since 2017, Dua Lipa songs have been offering excellent performance on the charts. The growth trajectory that she has been showing is impressive and we definitely foresee a huge success in terms of her musical career. The Dua Lipa breaks my heart and Dua Lipa Don’t start now have been a couple of great options that have been quite impressive.

Lipa has been into an on-and-off relationship with British Chef Isaac Carew. They were seen to be together till early 2017. Then again reconciled in January 2018 and broke up in January 2019. As of now, Dua Lipa has been understood to be dating Anwar Hadid who is an American model.

The singer, model, and songwriter from the UK has a net worth of $16 million. She has been able to achieve huge success in terms of the pop music career and we do foresee huge growth in the days to come.